There are various ways of how to mark interrogative clauses. In English, as well as in many other indo-european languages, we use a question mark. But have you ever wondered about its origin? Look! There just was one of them at the end of the sentence! It's beautiful. Like a swan neck, maybe…


Some say the question mark as we know it comes from ancient Egypt. Many of you certainly know that cats have been kept in homes since those times. Egyptians worshipped them. And there was a mythical cat Bastet, goddess of home and its protector.

And what does the cat's tail remind you of? When a cat is curious, its position makes its tail look like a question mark. And when you make the animal angry, the tail straightens to the exclamation mark! You see? 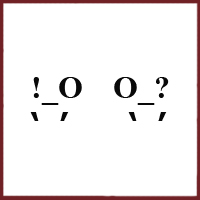 Oh yes, us people are likely to perceive things mysterious, aren't we? But unfortunately, this hypothesis is not true. Since there was no punctuation used in those distant times.


Although the history is not that funny as the story sketched above, it is not too uninteresting either.

Punctuation first became needed when Latin spread all over the Europe (and later also the rest of the world) along with religious texts. Their readers needed to know where various semantical parts began and ended as well as to interpret them correctly.

And so it was the readers and not the authors who started to insert first punctuation marks in texts. And at this point, in the Middle Ages, we can find first evidence of puncuation scattered over various text flows.

So here we come to the beginning of the seventh century. In these times, silent reading became widely used among scholars. Until then, lithurgical texts had been read or sung aloud.

Since time flew slowly and there were no planes to catch in the Middle Ages, meditation and silent search for God were accented by the Church, it took another century before the question mark came modestly upon the stage to join the play of words. It looked a bit different than we know it. It reminded of a dot (.) followed with a sharp tilde (~).

It is quite interesting that this form of question mark had been used until 17th century when it was replaced by a printed sign in the form we have been using until modern times.

Another theory claims that there was a sign of Q up on a dot used to mark questions and that the modern question mark is what is left from its full form.


You'll probably love to learn that even our question mark has its brothers and sisters.

While Arabic only inverts question mark so that it can be easily read from right to left, Greek and Armenian use even different signs to mark interrogative sentences. In Greek, a semicolon (;) is used instead of a question mark, while there is a special upper dot used to mark the meaning of our semicolon. In Armenian, there is a special sign reminding of a little snailhouse, a standalone shell in the upper part of the text line. It's called harcakan.

And you may wonder that one question mark is not enough in Spanish, so there are two of them used in each question: the first one is written upside down and it marks the beginning of each interrogative text part (even in the middle of a sentence, after a comma, for example) and another one in the form we use in English brings the question part to the end.