Read the following text about badminton and then answer five questions.

Where does the name “badminton” come from?
British soldiers played this game in Puna, an Indian city, in 1860's. They called it puna and it was played over the net with the help of rackets. At that time, the 8th Duke of Beaufort, Henry Somerset, used to organize tea parties at his mansion, Badminton House, and puna was played there very often. This game was also called battledore and shuttlecock. The battledore was a racket (a flat wooden paddle used at that time), the shuttlecock was a feathered ball (and it is called like this till today).
In 1860, a London toy dealer, Isaac Spratt, wrote about a new game in his pamphlet, calling it “Badminton Battledore”. And that's where this sport came to its official name.

One of the hardest sports? Oh, please…

Badminton has been seen as a funny “backyard” sport for many decades. But whoever tried to play this indoor sport properly, it means as it is played in competitions, have comprehended that it is no piece of cake. Concerning physical condition, speed and coordination (not only the hand-eye one), it is one of the world hardest and fastest sports. The most challenging is the men's doubles where there are many repetitive jump smashes in one ball rally, which require immense strength in thighs and good aerodynamics. Players also need to be sharp-eyed to be able to return swift smashes.
We can compare the total physical strength to the one of squash. But badminton requires brisker and swifter reactions. And in table tennis you have to be even quicker. All racket sports (tennis, table tennis, badminton and squash) differ in their techniques then. A light racket and a light ball enable badminton players to use their wrists more and thus hit a net kill with a stroke shorter than 10 cm.

Still in doubt?
The swiftest badminton stroke is a smash. The maximum speed of the smashed ball is the highest of all racket sports. The fastest smash was achieved by Malaysian Tan Boon Heong in 2010. With the measured speed of 261 mph (421 km/h), it was officially entered into the Guinness Book of World Records as the fastest smash in history. For comparison, the fastest stroke in tennis is a serve. Ivo Karlović hit the fastest serve in history, 156 mph (251 km/h), in 2012 during a Davis Cup match.

Popularity of badminton
Badminton is a major sport in Asia, like football and ice-hockey in the Czech Republic. Malaysia, China, South Korea, Japan, India… these are countries where badminton is a number-one sport. Over 300,000 people come and watch badminton tournaments there.
In Europe, it is very popular in England (the most popular racket sport) and Denmark (Europe's strongest badminton country). In our country, badminton is a minor sport but more and more people discover the beauty, blood and sweat of this sport every year and play badminton in their leisure time. Badminton has already found its way to schools and is taught in some of them.
In North America, badminton is taught in schools. But it's still just a backyard sport for most people. 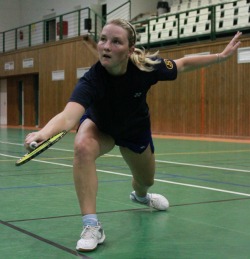 And now, here are five questions ready for you. Mark an answer which in your opinion best suits the question.