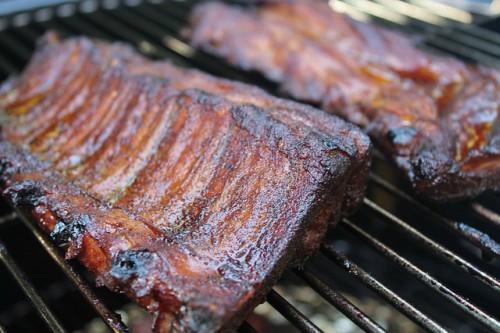 In the northern and western regions, BBQ means any meat cooked on a grill or over a fire. This could be a hamburger, a beef-steak, or anything else.

In the Midwestern United States, BBQ is slow-cooked beef called ‘beef-brisket’, with a spicy, rich tomato-based sauce. The city of Kansas-City, Missouri is famous for the special sauce it uses on BBQ. There is a famous restaurant called Arthur Bryants. They have been serving BBQ for over 80 years, which is very old for an American restaurant!

Further south from Missouri is Texas, which has a long and delicious tradition of great BBQ. Texans cook beef-brisket as well. And they also cook goats, a tradition from the country of Mexico. In Texas the BBQ is cooked by the smoke of an open fire. They use special wood from mesquite trees to make the fire. This mesquite wood has a distinct smoke and gives the BBQ a unique flavor. To the east of Texas, in the southeastern US, BBQ is smoked for many hours and most often uses pork. Many cities and states in the southeast have their own unique styles – which usually means a special sauce. In Alabama and Georgia, they make a sauce with tomatoes and it is a little sweet, smoky, and often spicy. In South Carolina the special sauce uses strong mustard. Further north, in North Carolina, the sauce is based on vinegar and is very, very spicy. It is too spicy for many people. In Memphis, Tennessee, they’re famous for using no sauce at all. Instead, they rub the meat with a mixture of spices. This mixture includes brown sugar and they cook it over a low, smoky fire for many hours.

If you visit any of these regions in the US, try the BBQ! It’s a truly unique food and each region is proud of their particular style.

(Adapted from an article provided by www.speakconfidentenglish.com)