„Big Brother Is Watching You.“ 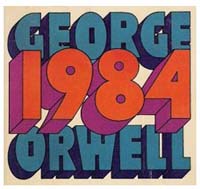 Nineteen-eighty-four is nowadays a classical masterpiece of dystopian genre and it is doubtlessly one of the most sublime novels of the 20th century. It is a brilliant analysis of all totalitarian systems. Dystopia has also its dystopian hero - it's Winston Smith, an ordinary, but not too brave man, who wishes for nothing world-shaking but to find the real image of the past, not the jiggered one. He wants to believe what he can see autoptic and to be free to declare that two and two equals four. Nevertheless, these elementary entitlements represent direct threat for power built on lies, and therefore Winston's rebellion is sentenced to failure in advance.

The novel was written in 1947. Unlike the other authors of that time, Orwell didn't succumb to the euphoria of post-war optimism and prospects of eternal peace, and thus his piece is a suggestive portrayal of the political perversion, in which every revolutionary movement in history ends up.

The story
The subject of the story = Winston Smith, the Ministry of Truth bureaucrat. The story has three parts;
a) the world of Nineteen Eighty-Four as lived and seen by Winston Smith;
b) his (illicit) sexual relationship with Julia and his intellectual rebellion against The Party,
c) his capture and imprisonment, interrogation, torture and re-education in the Ministry of Love.

The degradation re-educates them to love only Big Brother and The Party. Winston and Julia betray each other to survive, each admits to the other one, and each displays apathy toward the other's actions.

Political geography
The world is controlled by three functionally similar totalitarian superstates engaged in perpetual war with each other:

The Newspeak and culural impact
Nineteen Eighty-Four has had a significant impact on the English language. Many of its concepts, such as Big Brother, Room 101, thought police, memory hole, doublethink and Newspeak have entered common usage in describing totalitarian or overarching behaviour by authority. The adjective "Orwellian" is often used to describe any real world scenario reminiscent of the novel. The practice of suffixing words with "-speak" and "-think" (groupthink, mediaspeak) arbuably originated with the novel.

Nineteen Eighty-four was banned in the USSR for its perceived condemnation of communism and the Soviet leadership in particular.

Society
The society of Oceania is divided into several levels of a hierarchical system, with "Big Brother" on its top, followed by the Inner Party {less than 2 % of population}, Outer Party {about 13 % of population}and so-called Proles, the ordinary people, who create about 85 % of the Oceania population.

1984 on the silver screen
Orwell's novel was made into a film which came out in December 1984 and won several awards.

Read "1984" in English!
An abridged and simplified version of Nineteen Eighty-Four is available at www.englisbooks.cz {Intermediate level} as well as the full version or audiopack.

The Novel was published in 1962 and in 1971 it was made into a film of 131 minutes (directed by Stanley Kubrick). It has 3 parts of 7 chapters.
PRE-INTERMEDIATE