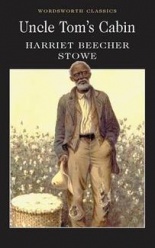 (Simplified and recorded by Laurie Bram)

Uncle Tom's Cabin is a very important book that changed the way Americans saw slavery. When Abraham Lincoln met the author, Harriet Beecher Stowe, he said: “So this is the little lady who wrote the book that made this great war.”

What we have for you today are two excerpts from this great book. Some difficult words and structures were simplified so that even less advanced students can enjoy the texts.

Eva has died and Tom is at the slave market. He is going to be sold soon.

Tom had been standing- sadly looking at the many faces moving around him, for one he would like to call master. And if you, sir, should ever be in a situation where you must choose, out of two hundred men, one who was to become your absolute owner and ruler, you would, perhaps realize, just as Tom did, how few there were that you would feel at all comfortable in being given to…

A little before the sale started, a short, broad, muscular man, in a checked shirt, and dirty old trousers, elbowed his way through the crowd, like one who is going actively into a business; and, coming up to the group, began to examine them systematically. From the moment that Tom saw him coming, he felt an immediate and revolting horror at him, that increased as he came near. He was clearly, though short, very strong. His round, bullet head, large, light-gray eyes, with their hairy, brown eyebrows, and stiff, messy, sun-burned hair, were rather ugly items it must be said; his large, rude mouth was full of tobacco, the juice of which, from time to time, he spit with great decision and explosive force; his hands were very large, hairy, sun-burned, freckled, and very dirty, and had long nails, in very bad condition. This man started a very free personal examination of the slaves. He took Tom by the jaw, and pulled open his mouth to inspect his teeth; made him pull up his shirt, to show his muscle; turned him around, made him jump, to show how he moved.

“Where were you raised?” he added, briefly, to these investigations.

“In Kintuck, Mas'r,” said Tom, looking around, as if for help.

“What have you done?”

“Likely story!” said the man, as he walked on… Again he stopped before Susan and Emmeline. He put out his heavy, dirty hand, and pulled the girl towards him; he touched her neck and chest, felt her arms, looked at her teeth, and then pushed her back against her mother, whose patient face showed the suffering she had been going through at every motion of the horrible stranger.

The girl was frightened, and began to cry.

“Stop that, you minx!” said the salesman; “no whimpering here, – the sale is going to begin.” And then the sale began…

Tom stepped upon the block, gave a few anxious looks around; everything seemed confused noise, – the sound of the salesman speaking in French and English, the quick French and English bids; and almost in a moment came the final thump of the hammer, and the clear ring of the word “dollars,” as the auctioneer announced his price, and Tom was sold. – He had a master!

He was pushed from the block; – the short, bullet-headed man took him roughly by the shoulder, pushed him to one side, saying, in a cruel voice, “Stand there, you!”

Tom hardly realized anything; but still the bidding went on, – now French, now English. Down goes the hammer again, – Susan is sold! She goes down from the block, stops, looks sadly back, – her daughter stretches her hands towards her. She looks with pain at the face of the man who has bought her, – a respectable middle-aged man, with a kind face.

“I'd like to, but I'm afraid I can't afford it!” said the gentleman, looking, with painful interest, as the young girl climbed onto the block, and looked around her with fear…

“I'll do whatever I can,” said the kind-looking gentleman. He started to bid on the young girl. In a few moments the price is too high for him. He is silent; the auctioneer continues; but bids get slower. It is now between an aristocratic old man and our bullet-headed horrible man. The contest only lasts a moment; the hammer falls, – the horrible man has got the girl, body and soul, unless God help her!

Her master is Mr. Legree, who owns a cotton plantation on the Red river. She is pushed along with Tom and two other men, and goes off, crying as she goes.

The kind gentleman is sorry; but, then, this happens every day! One sees girls and mothers crying, at these sales, always! It can't be helped. So he walks off, with what he has bought, in another direction.

“Well, Tom!” said Legree, walking up, and taking him by the collar of his coat, and speaking through his teeth, with great anger, “do you know I've made up my mind to KILL YOU?”

“I have,” said Legree, with a cruel, terrible calmness, “donejust –thatthing, Tom, unless you'll tell me what you know about these women!”

“D'ye hear?” said Legree, stomping his foot, with a roar like an angry lion. “Speak!”

“I han't got nothing to tell, Mas'r,” said Tom, with slow, firm, deliberate words.

“Do you dare to tell me, you old black Christian, you don't know?” said Legree. Tom was silent.

“Speak!” thundered Legree, hitting him furiously. Do you know anything?"

Legree drew in a long breath; and, holding in his anger, took Tom by the arm, and, coming close to his face, said, in a terrible voice, “Listen, Tom! – you think, because I've let you off before, I don't mean what I say; but, this time, I've made up my mind, and counted the cost. You've always stood it out against me: now, I'll win, or kill you! – one or the other. I'll count every drop of blood there is in you, and take them, one by one, till you give up!”

Tom looked up at his master, and answered, “Mas'r, if you were sick, or in trouble, or dying, and I could save ye, I'd give ye my heart's blood; and, if taking every drop of blood in this poor old body would save your precious soul, I'd give 'em freely, as the Lord gave his for me. O, Mas'r! don't bring this great sin on your soul! It will hurt you more than it will me! Do the worst you can, my troubles'll be over soon; but, if ye don't repent, yours won't ever end!”

Like a strange moment of heavenly music, heard in the quiet of a storm, this made Legree pause. He stood amazed, and looked at Tom; and it was so quiet, that the tick of the old clock could be heard, measuring the last moments of mercy in that hard heart.

It was but a moment. There was one hesitating pause, and the spirit of evil came back and Legree, foaming with anger, knocked his victim to the ground.
Scenes of blood and cruelty are shocking to our ear and heart. What man has nerve to do, man has not nerve to hear…

“Keep hitting him, till he gives up! Give it to him! – give it to him!” shouted Legree. I'll take every drop of blood he has, if he does not speak!"

Tom opened his eyes, and looked at his master. “You poor miserable creature!” he said, “there ain't no more you can do! I forgive you, with all my soul!” and he fainted entirely away.

Slavery in the South