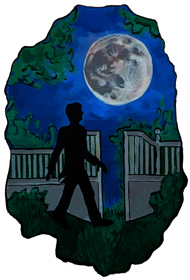 Once, there was a little man. His mother made him a beautiful green and gold suit. It had shiny buttons too. He was proud of this suit. When he stood in the mirror, he could not look away from himself.

There were so many places he wanted to go, so he could show off his suit. He imagined being in a meadow and how wonderful he would look in the sunlight. But his mother told him, “No. You must only wear it on special occasions, such as your wedding.”

His mother worried that he would ruin the suit. She warned him that he would never own such beautiful clothes again. So he reluctantly, and carefully, put his suit away. Though, he didn't want to. His mother forced him to. If it were up to him, he would wear it forever.

At night, he dreamed of wearing the beautiful suit. Sometimes, his dreams turned into nightmares. In these nightmares, a stain would appear on the sleeve, or a button would fall off. It was terrible.

Eventually, his mother let him wear his suit to church on Sundays. But only if it wasn't raining. Also, he had to keep tissue paper on the buttons so they would stay shiny. Oh, and he had to fold it neatly away when he came home.

Each Sunday, he followed all of these rules. Until one night, he awoke to moonlight shining outside his window. However, this moonlight was strange. It was brighter. And there were strange thoughts in his head too. These thoughts told him to go outside wearing the beautiful suit. But that was crazy! His mother would be so angry.

He sat up from his bed and rubbed his eyes. He looked at the dresser where his suit was hidden away. It was decided. He would wear his suit, as it should be worn, no matter how afraid he was of his mother.

Outside his window, moonlight shone over a garden. Crickets chirped and the wind blew by. Very carefully, and quietly, he tip-toed across the wooden floor. He hoped it wouldn't creak and his mother wouldn't wake.

He took out the suit, tore off the tissue paper from the buttons and put it on. From the mirror, he saw a handsome man in a beautiful suit. It was meant for him, and it was meant to be worn. The suit looked brand new. Not a button was dull and not a thread stuck out.

Very quickly, and quietly, he went back to the window. He was under the moonlight and his buttons twinkled like the stars in the night sky. He got onto the window ledge and climbed down to the garden path below.

Now, he was outside. The garden looked very different under the moonlight compared to the sunlight. Each flower shone white or black. The dew on the leaves sparkled like jewels. In the trees and bushes, he heard the chirping of crickets. The night was very warm too. It was the warmest he had ever felt. And the sky was full of bright stars.

The little man was so happy. He wanted to shout and sing because of his joy, but he didn't. He stood quietly under the moonlight. Then, he let out a small cry and ran with his arms stretched out. He ran as if he could embrace the warmth of the night…

But he didn't follow the paths in the garden. He ran through thick bushes, clusters of white flowers, wet grass, and thickets of lavender. He even ran into thorns and branches that tore his suit. Threads hung loosely from the sleeves. His suit was now ruined, but he didn't care! He knew that his suit was meant for this.

Beyond the bushes was a duck-pond. Under the moonlight, it looked like a great bowl of silver and black soup. Frogs croaked noisily.

He ran into the pond. The water was up to his waist, then up to his shoulders. With his hands, he made little waves. They were silver under the moonlight. He swam across the pond, coming out of the water with his suit soaking wet. Without a care, he ran through more bushes and grass. He kept running until he came out onto the road. He jumped and ran. Then he laughed and walked. He was enjoying his suit, the suit his mother had made for him with her tireless, loving hands.

The moth circled around his head, coming closer and closer until its wings touched his lips.

The next morning, the little man was found dead. He was at the bottom of a stone pit. His neck was broken. His beautiful suit was stained with blood, grass, and dust. But his face, his face was marked with great happiness. Had you seen it, you would have known that he had died happy.