A long time ago, there lived a gifted scientist. His name was Aylmer.

But one day, something inside Aylmer changed. He had fallen in love with a beautiful woman named Georgiana. His love for Georgiana became more powerful than his love for science. So, he married her. Then he gave his laboratory to his assistant.

Yet, shortly after their wedding, Aylmer began to miss science. His love for Georgiana was not as powerful. He needed his experiments to keep him happy. For that reason, he had looked at Georgiana one day and said, “Have you ever thought of removing the mark on your cheek?” 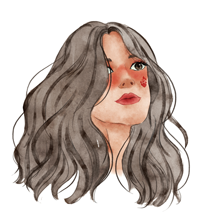 “No,” Georgiana answered. “People have told me that my mark is a charm.”

“That would be true if that mark was on somebody else's face. But you are too perfect. This mark is the only imperfection you have,” Aylmer said.

“Excuse me!” cried Georgiana. She was very hurt by her husband's words.

“Then why did you marry me?” she asked. “If I am imperfect to you then leave!”

The mark was also shaped like a hand. In the past, men had told her that a fairy had touched her face when she was born. Men had always thought her mark was beautiful. It was only jealous women who hated the mark…and her husband.

Unfortunately, Aylmer had become obsessed with making his wife perfect. And the mark was the only flaw standing in his way. But even more than a flaw, Aylmer began to see the mark as a symbol of his wife's eventual death. Because of this, the mark caused him great pain.

This was all too sad. The married couple should have been happy. After all, they had just married! But Aylmer could not stop thinking of the mark. It was the first thing he saw when he woke up, it was all he could see during the day, and it was all he could dream of at night.

Sadly, Georgiana began to fear her husband's look. When he looked at her, her face would turn pale. Then, the mark would look like a ruby on a white stone.

“My dear husband,” Georgiana said with a weak smile. “Do you remember the dream you had last night about this hateful mark?”

“No, not at all,” answered Aylmer, surprised.

Aylmer had not realized his dreams had revealed his deepest secrets. This often happens when someone is not in a healthy state of mind.

Though after thinking about it, Aylmer remembered his dream. He had dreamt of working in his laboratory with his assistant Aminadab. Together, they were trying to remove the birthmark on Georgiana's cheek. However, the deeper his knife went into her cheek, the deeper the small hand sank until it caught hold of Georgiana's heart.

“Aylmer,” said Georgiana, “I do not know what the cost would be to remove my birthmark. Removing it could hurt my face or my health.”

“My dear wife, I have spent a lot of time thinking about this,” answered Aylmer. “I am sure I can remove it.”

Georgiana wanted to make her husband happy. She also wanted to not fear his look.

“Then remove the mark,” Georgiana said. “Life is not worth living if this hateful mark brings you pain. You are a gifted scientist and have made great discoveries. I trust you to remove it for the sake of your peace and my own.”

“Your trust is not wasted. I am ready to make this cheek as perfect as every other part of you,” Aylmer said. He then kissed her right cheek, the one without the red hand.

The very next day, the couple went to Aylmer's labo­ratory. It was the place where he had made all his famous discoveries. He felt good to be back. It brought him great confidence.

While Aylmer worked in his lab, Georgiana lived in a beautiful room he had prepared nearby. He tested many powerful experiments on her. Still, the mark remained.

When Georgiana waited in her room, she read his scientific notes. She found that none of his experiments had failed. Then she decided to see her husband—the gifted scientist—at work.

The first thing Georgiana saw after entering the laboratory was the hot furnace. There was a lot of soot, which meant it must have burned for a long time. She also saw machines, tubes, and strange liquids. Yet, what caught her attention was Aylmer himself.

Aylmer looked nervous. He was pale and sweating. He was working on making a liquid. Georgiana realized he had been hiding his nervousness from her.

“You can be honest with me,” Georgiana said. “I know the risks and they are worth it. I will drink whatever you make for me, even if it is a poison.”

“My dear, nothing will be hidden,” Aylmer said. “I have already given you chemicals powerful enough to change you completely. There is only one thing left to try and if that fails, we are ruined!”

He led her back to her room where she waited once more. She hoped, for once, she could be perfect for him. But then she realized that even perfect would never be enough. He would always reach for something higher. There would always be something newer, better, and more perfect.

Hours later, Aylmer returned carrying a glass with a colorless liquid. “The chemical process went perfectly,” he said. “Unless all my science has tricked me, it cannot fail.”

To test the liquid, Aylmer grabbed a flowerpot with a dying flower in it. Then, he placed a drop of it in the soil. In a few moments, the plant became healthy and green again.

“I do not need proof,” Georgiana said. “Give me the glass. I am happy to put my life in your hands.”

She then drank the liquid and immediately fell asleep. Aylmer sat next to her, watching and taking notes. He noted everything: her birthmark, her breathing, even the movement of her eyelids.

Slowly, with every breath that came and went, the birthmark lost some of its redness.

He pulled away the window curtains to see her face in daylight. She was so pale. She then opened her eyes and looked into the mirror he held. She tried to smile when she saw her mark had almost disappeared.

“My poor Aylmer,” she said gently. “You have aimed so high. But you have rejected the best that Earth could offer. I am dying, my love.”

It was true. The hand on her face had been her connection to life. As the last trace of redness left her cheek, so did her last breath.

Blinded by imperfection, Aylmer had thrown away his wife's life and his chance for happiness. He had realized too late that she had been perfect all along.