Around 700 BC, Celtic people began to arrive in the British Isles. Many of them were tall, and had fair or red hair and blue eyes. These were the Celts, who probably came from central Europe or further east.

Around 700 BC, Celtic people began to arrive in the British Isles. Many of them were tall, and had fair or red hair and blue eyes. These were the Celts, who probably came from central Europe or further east.

They were technically advanced. They knew how to work with iron and could make better weapons then the people who used bronze. 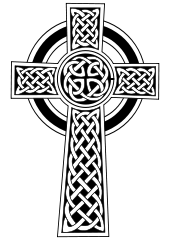 The Celts are important in British history because they are the ancestors of many of the people in Highland Scotland, Wales, Ireland and Cornwall today. Celtic languages are still spoken. The British today are often described as Anglo-Saxon. It would be better to call them Anglo-Celt.

Our knowledge of Celts is slight. The Celts were organised into different tribes, and tribal chiefs were chosen from each family or tribe, sometimes as the result of fighting matches between individuals, and sometimes by election.

The Celtic tribes continued the same kind of agriculture as the Bronze Age people before them. But their use of iron technology and their introduction of more advanced ploughing methods made it possible for them to farm heavier soils.

The Celts continued to build and use hill-forts. The hill-forts were filled with houses, and they became the simple economic capitals and smaller 'towns' of the different tribal areas into which Britain was now divided.

Within living memory certain annual fairs were associated with hill-forts. For example, there was an annual September fair on the site of a Dorset hill-fort.

The Celts traded across tribal borders and trade was probably important for political and social contact between the tribes. For money the Celts used iron bars, until they began to copy the Roman coins they saw used in Gaul (France).

The Celtic tribes were ruled over by a warrior class of which the priests, or Druids, seem to have been particularly important members. These Druids could not read or write, but they memorised all the religious teachings, the tribal laws, history, medicine and other knowledge necessary in Celtic society. The Druids from different tribes all over Britain probably met once a year. They had no temples, but they met in sacred groves of trees, on certain hills, by rivers or by river sources. We know little of their kind of worship except that at times it included human sacrifice.

During the Celtic period women may have had more independence than they had again for hundreds of years. When the Romans invaded Britain two of the largest tribes were ruled by women who fought from their chariots. The most powerful Celt to stand up to the Romans was a woman, Boadicea. She had become queen of her tribe when her husband had died. She had frightening appearance. In AD 61 she led her tribe against the Romans. She nearly drove them from Britain, and she destroyed London, the Roman capital, before she was defeated and killed. Roman writers commented on the courage and strength of women in battle, and leave an impression of a measure of equality between the sexes among the richer Celts.

Halloween is a holiday celebrated mainly in the USA, Canada and the British Isles on the night of 31 October. It was originally a Celtic pagan festival (called SAMHAIN [so:in]) and means November in Celtic language.
PRE-INTERMEDIATE