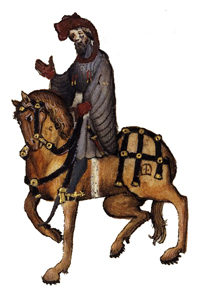 This is a story about war and love.

There once was a duke named Theseus. He was a powerful man, and he ruled over all of Athens. He had just conquered the Amazons and married their queen, Hippolyta. Hippolyta had a younger sister named Emilie. And together they traveled back to the city of Athens with Theseus and his army.

On their journey back, Theseus was happy about his victory. But then he saw a group of women in the middle of the road. These women were dressed all in black, like death. And they were crying. One of them grabbed the leash of Theseus’s horse.

“How dare you disrupt me and my victory!” Theseus shouted. “Now, tell me who you people are.”

One woman answered, “I am sorry. We do not mean to disrupt your victory. We have been waiting for you. We need your help.”

“Why do you need my help,” Theseus asked.

“Believe it or not, I was once a beautiful queen. But now I am grieving. We all have lost our husbands at the Battle of Thebes. An evil man named Creon killed them and took over our city. He would not let us bury our men. He let wild dogs eat them! Please, help us,” the woman cried.

Theseus thought his heart would break after hearing their story. He promised to avenge their husbands and defeat the evil Creon. He turned around on his horse and took his entire army to the city of Thebes.

Theseus stopped at a field outside of the city. There, he fought Creon and his army. He killed Creon and then recaptured Thebes. He returned the bones of the dead husbands to the women. They were able to bury their husbands and find peace.

Meanwhile, looters stole armor and weapons from the dead bodies on the battlefield. And while the looters searched, they found two young knights. These knights were cousins and belonged to the royal family of Thebes. Their names were Arcite and Palamon. But these young knights were badly wounded from battle and close to death. So the looters took the wounded knights to Theseus. Theseus ordered that the knights be taken to Athens and put in prison.

When Theseus returned to Athens, he was called a hero and given a crown made of flowers.

Years passed, each one filled with honor for Duke Theseus, and misery for the two knights. But then, on a spring morning, something changed. Emilie, the Queen's beautiful sister, was walking through the garden. She sang songs and picked flowers. Above the garden was the prison tower where the two knights, Arcite and Palamon, lived. 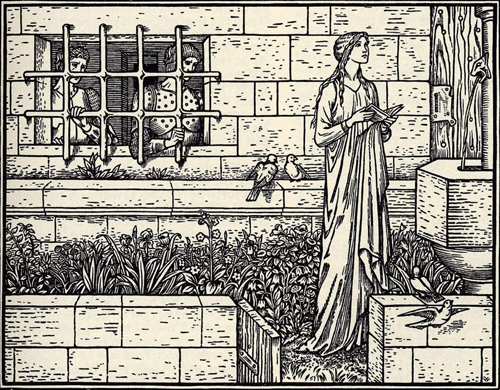 Palamon walked in circles, feeling bad for himself. He wished he had never been born. Then, he saw the beautiful Emilie. Palamon felt as if someone had stabbed his heart.

“What's wrong, cousin? You look as white as a ghost,” Arcite said.

“That is because I have seen the death of me,” Palamon answered. “Below us is the most beautiful woman. She is Venus herself. Dear gods, please have mercy on me and help me escape this prison!”

Arcite looked out the window and saw the woman. He then shared Palamon's pain. “She is more beautiful than Venus,” Arcite said.

Palamon was angry. He turned to Arcite and shouted, “Cousin, you are a traitor! I fell in love with her first. I will not let you steal her from me.”

Arcite laughed and said, “'It’s every man for himself out here, cousin. We both love her. And we are both stuck here in this prison. That is the end of that."

For a long time, Arcite and Palamon resented each other.

Meanwhile, another duke named Perotheus came to Athens to visit Theseus. The two had been best friends since they were children. Duke Perotheus was also good friends with Arcite. So, Perotheus begged Theseus to free his friend from the prison tower. And eventually Theseus did, but it took Perotheus many requests and many prayers. But there was a catch. The catch was that Arcite could never return to Athens, no matter the reason. And if he did, Theseus would cut his head off.

The only option Arcite had was to return to Thebes. This was awful for Arcite, because all he wanted was to see Emilie. He would have rather stayed in prison if it meant he could see her.

“Curse my life! Palamon, you have won!” Arcite had shouted. “All I have ever wanted was to escape that tower, and now that I have, I am more miserable. I thought I knew what would make me happy, but I was wrong. We think we know where to find happiness, but we don't. We are like drunk men trying to find their houses but always get lost along the way. That is life. That is me now. Because I can't see you, my beautiful Emilie, I might as well be dead.”

Palamon, on the other hand, was furious that Arcite had escaped the tower. “Damn you, Arcite!” he cried, “You've won the fight. You're free to go back to Thebes. You can raise an army, capture Athens, and make Emilie your queen. And I will rot here."

A fire grew within Palamon, and it burned with rage. “The gods are cruel!” he screamed. “You make all men, even the innocent, suffer. And then you let us die like animals! What is the purpose of such a life? Why should we even try to be good? You have allowed for an awful snake to get away and doomed me to waste away in this tower. The gods are punishing me!”

The summer passed miserably for both Arcite and Palamon. Each day was a day away from Emilie. One was banished from Athens and the other was chained away in the prison tower.

Then one night, Acrite had a dream. In his dream, the god Mercury told him to go back to Athens. And so Arcite set off for the city where his beautiful Emilie lived.

Palamon had set off too. He had broken free from prison with the help of a friend. This friend had put opium in the prison guard's wine. Palamon hid in a grove, planning his next move to win Emilie.

Now both Arcite and Palamon were in Athens and on one fateful day the two of them reconnected.

Arcite had become Theseus’s main servant through trickery. He pretended to be someone else, a man named Philostrato. And Palamon was hiding in a grove. When Arcite went for a stroll and cried about his love for Emilie, Palamon jumped out from the bushes. 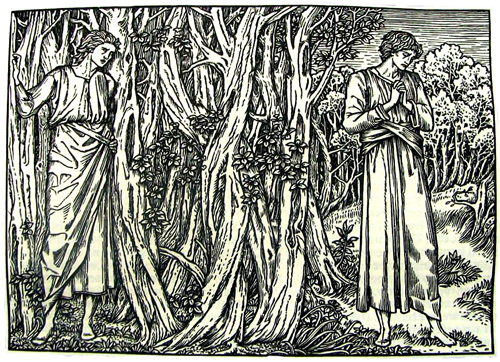 "Arcite, you traitor! It’s me, Palamon! I have escaped from prison. You can either forget about Emilie or die here by my bare hands! She is mine and mine only,” Palamon screamed.

Arcite drew his sword and said, “Love has made you crazy. If you had a weapon, I would kill you here and now! But since we are knights, we will act as knights. That is why I challenge you to battle. We fight tomorrow. Come alone. If you kill me, Emilie is yours.”

Palamon agreed, and they parted ways.

The next day they faced each other in the grove. They didn't say a word, but they helped each other put on their armor. Then they grabbed their spears and began fighting. It lasted for hours. So much blood was spilled.

It was also this day that Theseus decided to go hunting in the grove. Hippolyta and Emilie went with him. Theseus immediately found Arcite and Palamon battling like two wild dogs. He rode his horse in between the two of them and pulled out his sword.

“Stop! I’ll kill whoever swings next! Tell me what is going on here!" Theseus demanded.

And so, the two knights confessed their crimes and their love for Emilie. Theseus also learned of Arcite's trickery. But before Theseus could swing his sword, Hippolyta and Emilie begged him to stop. They convinced him to have mercy. He did, but under the condition that the knights never war against Athens. Arcite and Palamon agreed and thanked him.

Then Theseus told the knights to leave for a year and prepare for a tournament in Athens. The winner would marry Emilie.

The day of the tournament came quickly. Theseus had a grand stadium built for the event, while both knights rallied an army to fight for them. But their armies were no ordinary group of fighters. Their armies included kings from other great cities and knights of the best kind.

All of Athens was excited for this day. Everyone, except for the lovely Emilie. The morning of the tournament, Emilie prayed to the goddess Diana. She begged for Diana to stop the battle from happening. Truly, all Emilie wanted was to remain unmarried and to serve Diana. She did not want these men to fight over her.

However, Diana appeared before Emilie and told her that she would marry one of the knights. Emilie was in shock but decided to trust Diana's plan for her.

And so the tournament began! The crowd shouted with excitement as Theseus, Palamon, and Arcite rode in with a grand parade. Both armies lined up, each one equal in skill and honor.

Once everyone found their place, the announcer shouted, “Let the battle begin!” And with that, the trumpets blared, and the fight started!

The knights raced on their horses, spears went flying into the air, and blood splattered the stadium. Arcite and Palamon fought like hungry lions. No one knew who would win. No one, except the gods.

It was Palamon who met defeat. Still, he fought. Even though he was losing, he did not want to accept his loss. He could not lose Emilie!

So, Theseus ended the battle. He saw that Palamon had lost. It was announced that Arcite would marry Emilie.

The crowd cheered! Arcite rode on his horse victoriously.

Though, not all the gods were happy with this outcome. The goddess Venus had wanted Palamon to win. She was so sad that he lost. Whereas the god Mars was so happy that Arcite won. Meanwhile, the god Saturn had another plan.

Suddenly, an earthquake shook the ground. Arcite flew to off his horse. He was badly hurt. Blood covered his face.

Arcite was taken to get his wounds healed, but they only grew worse. He was heartbroken. He knew he would die. So he asked Emilie to do him a favor. “Emilie, my love,” Arcite said. “I am so sorry. But please, if you decide to marry again, marry Palamon, my dear cousin.”

Then, Arcite died, and the god Mars took care of his soul. Emilie cried and cried, as did Palamon. In fact, all of Athens cried. It was a tragic moment. A moment that lasted for several years.

Eventually, time healed this wound and Theseus called for Palamon and Emilie to talk with him. He decided it would be best to unite Thebes and Athens. He asked the knight and the beautiful woman to marry.

“We must not grieve forever," Theseus said. “To do so brings no honor to the dead. It brings no honor to Arcite. It is time we turn your sorrows into joy.” So, Theseus married Emilie and Palamon. As husband and wife, they loved each other deeply and never fought or suffered. In the end, Palamon finally won Emilie, his true love.