What exactly is Hallowe'en and what does it celebrate? 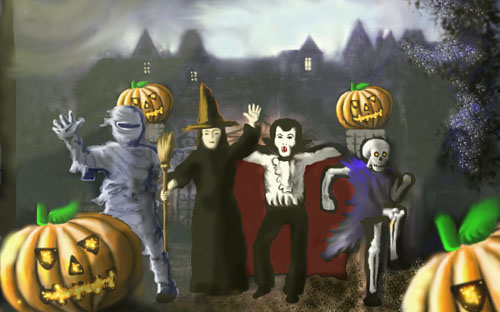 Hallowe'en is one of the few western holidays that haven't been adopted by eastern cultures so far. This may change, however, because the effects of globalisation are apparent everywhere around us. Will Hallowe'en follow the footsteps of St. Valentine's Day, which has been widely accepted in many countries and cultures?

Hallowe'en is celebrated on the 31st of October, especially in the USA, Canada and the British Isles. It is a relatively young holiday – it dates back to the 19th Century, when it was brought to America by immigrants from Ireland and Scotland. Today, it is a part of the pop culture of the 20th century.

The name of the day comes from a contraction of Hallow Eve, which actually means that it is the evening before another important day celebrated by Roman Catholics, All Saints Day. Other countries and cultures have similar holidays to All Saints Day, such as The Day of the Dead in Mexico or Dušičky in the Czech Republic.

On Halloween, children usually wear funny or scary costumes or masks, such as ghosts, witches, zombies, or vampires. This custom comes from a Celtic tradition. On this day, according to the Celts, spirits rose from the dead. In order to protect themselves from the evil ones, the Celts wore horrible masks that were supposed to scare them off.

One of the symbols of Halloween is the so called Jack-O'-Lantern. It is a vegetable, usually a large pumpkin, with a scary face carved into it. People put a candle inside it and put it in front of their house after dark.

A popular activity with the children is trick-or-treating. They walk around the neighborhood in their costumes, knock on people's doors and say ‘trick or treat’ and are given some candy. The phrase actually means something like ‘we will play a trick on you or you can give us something nice and sweet’. There are also costume parties with special games both for kids and for adults, television broadcasts many programmes with the Halloween theme etc.

Unfortunately, Hallowe'en is also a day of the occult and many bad things happen on this day, too.